In all likelihood, the earliest tools employed by humankind for crushing or grinding seeds, nuts, and other food-stuffs consisted of little more than a flat rock, upon which the material was crushed by pounding with a stone or tree branch. Indeed, "wild chimpanzees" have been observed employing just such flat rocks and branches to open hard-shelled nuts. The first substantive improvement on the rock and branch type-crusher was the mortar and pestle. The archaeological records shows as early as 30,000 years ago, that artistical cave-mans employed the mortar and pestle to grind and mix the pigments they used to create their magnificent "cave-art."

Far more efficient than the flat rock or even the mortar and pestle was the handmill with a turnable grinding stone or as it is known in the New World, the "mano" and "matate", which are to date long befor the agricultural revolution (see Figures 1 & 2). 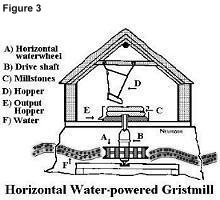 The handmill consists of a flat rock, often hollowed or concaveiterranean littoral. It is believed that the waterwheel spread into the Mediterranean community from Western Anatolia, where, it is believed, the technology was borrowed from the Persians, who, may have in turn, learned of the waterwheel from the Chinese. The earliest known examples of waterwheels were of the horizontal design, i.e., the paddle wheel lay flat in the water and acted directly on the spindle or drive shaft (See Figure 3).

As early as the First Century C.E., the horizontal waterwheel, which is terribly inefficient in transferring the power of the current to the milling mechanism, was replaced by waterwheels of the vertical design. In general, there are two types of vertical waterwheels, the undershot wheel (See Figure 4) and the overshot wheel (See Figure 5), which is the more energy efficient of the two. Both varieties of the vertical waterwheel require the use of gears to transfer the motive force of the water to the milling mechanism.
There are several disadvantages to the undershot wheel. One being in the manner in which the water's force or power is utilized. The undershot wheel rests directly in the stream and depends upon the force of the water to push the wheel. In addition to inefficiently harnessing the stream's motive force,the undershot wheel also requires a rather substantial and constant of water, and thus becomes even more inefficient or even useless at times of low stream-flow. 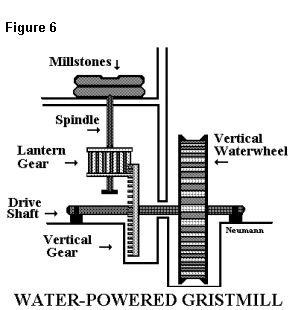 Because of the need for a constant and steady water supply, it is most often the undershot wheel that is found in association with a millpond. The overshot wheel, on the other hand, more efficiently harnesses the motive force of the stream and is far less dependent upon streamflow. In fact, the overshot wheel can be operated at some distance from the actual stream or water source. Water to power brought to the overshot wheel by means of a flume or pipe. From the flume, the water falls onto the wheel's paddles, thus harnessing both the force of the water and of gravity.
The mechanical principles underlying the working of a water-powered mill are, from the hindsight of the 20th century, quite simple. Whether undershot wheel or overshot wheel, the water propels the wheel, which transfers the water's power to the drive-shaft, which turns the grind-/mill-stones (See Figure 6). Of course, waterwheels were employed to do more than mill grain, by the 10th century C.E. waterwheels were supplying power for bellows and drive hammers (See Figure 7) and soon after they were powering wood saws and lathes.


In the Late Middle Ages, gristmill complexes often took on an almost industrial character.
In Figure 8 we see the complexity of such an operation. Note the two undershot water wheels, with accompanying spindles and lantern gear, at the center of the figure. The pack animals haul the grain to scales. After being weighed and recorded by the tally-master, the grain was fed to millstones via the two hoppers. Note also the spare millstone. 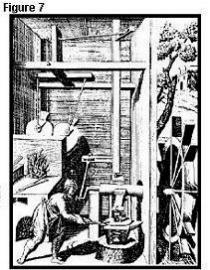 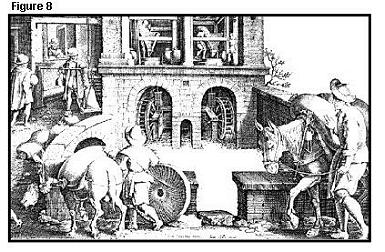 As more variants of vertical water wheels, for example, there were also mittelschlächtige mill wheelswhere the water (the level of the shaft) at half the height of the mill wheel falls into the blades. And rarely also combined driven water wheels e.g. water wheel in the stream and water supply from above but not in front of the apex of the wheel but behind the apex on the water wheel (water weight turns in the same direction as the water flow).